I haven't been to Cebu City since my last court hearings in July, and that wasn't much fun, although I had great pleasure in accepting the resignation of my lawyer; he was totally useless.

I decided to go at the penultimate hour; I had to go to Surigao City for some itsy-bitsies, and I hate the place so much that at 5pm I decided to take the 7pm boat to Cebu to get out of there.

The trip is overnight; it gets into Cebu about dawn, plus or minus a bit. So we don't get to see very much of the intervening trip. It follows Magellan's route to Cebu, from Limasawa Island on, and about dawn we pass Punta Enggaño (Enchanted Point) on Mactan Island.

Punta Enggaño is the prime shell-collector's source; everyone in the village is involved in the shell business somehow. Some specialise in rare shells, others in regular, pretty stuff for tourists and bathroom decorations, and others make some of the best fakes I've ever been taken in by. (If you've ever greedily bought a very rare shell at a bargain price, you can imagine your chagrin when you look at it again next day in daylight, and see that a tuppenny shell has been 'adjusted' with a hand file and some spray paint into a very great rarity. So you swallow your great pride in your infallible 'expertise', and endeavour to find the next sucker in line.)

You pass through the strait between Cebu City and Mactan Island a bit after dawn, and pass through the channel to Pier 1, in the heart of the city. With a bit of manoeuvring (hurling of anchor lines, etc) we end up with the bow pointing towards the dockside. But not before we've been visited by the local coin divers. They come out after every incoming ship, hoping for a few pesos.

The wife holds the coin collecting net, and the husband nonchalantly paddles, using only one hand and his ankle, to twist-paddle the boat along. If his wife misses the thrown coins, he dives in and gets them.

They have a classical bangka; long slim hull, two outriggers, and no motor, and he drives it like an extension of his own body, with consummate skill, just as you might ride a familiar bicycle. 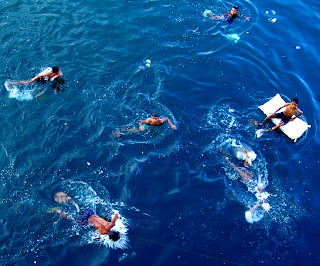 A few days later, arriving in Surigao City, we are met by the local coin-divers, but they've gone all hi-tech. Their boats are rice sacks, stuffed with polyethylene foam chunks from broken fish-boxes, and each one wears a single or two ping-pong bat shaped paddles strapped to his feet.

But the little buggers still catch every coin I toss over the side, no matter how I try to obstruct them, by throwing coins out of reach.
Posted by Richard Parker at 11:30