After the 1948 'Israeli War for Liberation', when the Ashkenazis had taken over as much of Palestinian territory as they could, and expelled three-quarters of a million native peasants, farmers, merchants, traders, and others from their homeland, the fresh and thrusting United Nations, together with their hosts, the United States, declared Jerusalem a holy and international city. 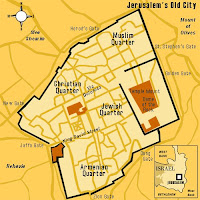 Some of you may remember this old map of Jerusalem from your Sunday-school Bibles. It shows the effective division of the city into ethnic quarters under the Turkish Ottomans. A small spat between the Catholic Christians and the Orthodox Christians over the workings of the Holy Sepulchre caused the Crimean War.

The UN, in 1949, right after the Israelis conquered the bits of Palestine they could get, (the single road from the coastal plain to Jerusalem was particularly hard-fought) debated and declared UN Resolution 194.

The UN: "Resolve[d] that, in view of its association with three world religions, the Jerusalem area, including the present municipality of Jerusalem plus the surrounding villages and towns, the most Eastern of which shall be Abu Dis; the most Southern, Bethlehem; the most Western, Ein Karim (including also the built-up area of Motsa); and the most Northern, Shu'fat, should be accorded special and separate treatment from the rest of Palestine and should be placed under effective United Nations control"

Nothing. of course, happened. The relatively new Brit-made kingdom of TransJordan took over the eastern side of Jerusalem, including the entire Old City.

Until 1967, the Israelis had only a single road leading to their part (the western suburbs) of the Holy City.

The UN resolution, of course, was ignored by the Israelis, who invaded the whole of Jerusalem in 1967, when we had lots of joyful pictures of Israelis celebrating at the foot of King Herod's Temple. 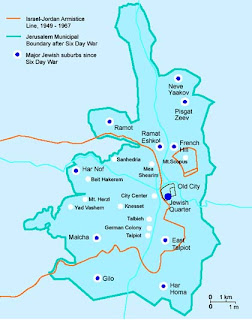 You'll see, from this map, how things have changed after the successful Israeli invasion of 1967.

It's a highly misleading Israeli government propaganda map. None of the new Israeli settlements just outside the Israeli-declared municipality of Jerusalem are shown, although those inside are. All of those east of the orange line (the 'Green Line') are illegal, as are those outside Jerusalem, not shown at all.

The Palestinian ghettos are not shown at all. 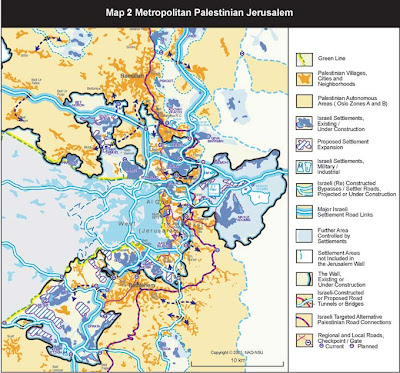 On this more realistic current map, the Old City of Jerusalem is a small space, somewhere under the centre of the map.

The infection of illegal special Israeli-only roads, separation barriers, and settlements has taken over the rest of it, and beyond, to Ma'ale Adumim, a new Israeli city commanding the pass down to the Jordan Valley.

Click on the picture to see a larger map.

The blue bits are inhabited (dark blue) or dominated (light blue) by recently-arrived Israeli colonists. The blue roads are for Israeli users only.

The darker brown bits are Palestinian towns, established there for, at very least, 2000 years.

The white bits are mostly Judean Desert, not wanted by anyone at all, and not allowed to be controlled by Palestinians under the Oslo agreements.

Do you, from this map, get a slight idea that the original natives of Palestine are getting pushed to the margins?

Another detailed map of the 'Separation Barrier' around Jerusalem is from B'Tselem, the Israeli Information Center for Human Rights in the Occupied Territories.
Posted by Richard Parker at 12:09