How To 'Disappear' A Country

The first of the Israeli maps shows the Levant in 1922, after the British and French had carved up the Middle East between them, and the Brits drew a few lines and transferred half their Mandate to the younger son, Abdullah, of Sherif Hussein of Mecca. Another Husseini got Iraq, and the father kept the Hejaz, the area of the Moslem Holy Cities of Mecca and Medina.

1) At that time, Saudi Arabia (as shown on this map) did not exist. Few people, then, knew much about oil, and neither the Frogs nor the Brits wanted much more of Arabia.
In 1916 Hejaz' independence was proclaimed by Sherif Hussein ibn Ali, the Sherif of Makkah. In 1924, however, ibn Ali's authority was usurped by Ibn Saud of the neighboring region of Nejd and became known as the Kingdom of Hijaz and Nejd and later the Kingdom of Saudi Arabia. The Nejdis have remained as the least likeable of Middle Eastern peoples (always excepting Zionists) ever since.
2) The Israeli propaganda map shows Transjordan as: Area separated and closed to Jewish settlement, 1921.
By this time, of course, the Brits had already woken up to the mad colonialist ambitions of the Zionists, and were trying to limit it. 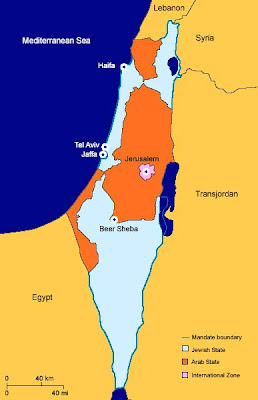 This next map shows the UN's partition plan of 1947.

The Israeli Ministry describes this map as:

In 1947, Great Britain relinquished to the UN the power to make decisions relating to the status of the Land of Israel. The General Assembly appointed a special committee that collected evidence and decided unanimously that Israel should be granted independence. Most of the committee members favored partitioning the land into two states, a Jewish state and an Arab state, with Jerusalem under international supervision. On November 29, 1947, the UN General Assembly accepted the partition resolution, 33 to 13.

The "Land of Israel" did not exist in 1947, and never has, except in fevered Zionist imaginations.

The Brits did not give up their mandate over Palestine until six months later, on 10 May 1948, the same day that 'Israel' declared its 'independence'. Just another instance of Zionists 'massaging' history. 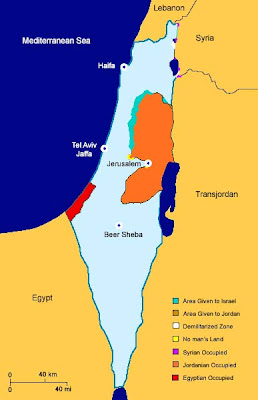 By this time, the Israeli Zionist colonists had taken matters into their own hands, and invaded as much of the rest of Palestine as they could reasonably take at the time.

Much of their side of the story has been sanitised and glamourised. See:

Exodus is a 1960 epic war film made by Alpha and Carlyle Productions and distributed by United Artists. It was produced and directed by Otto Preminger from a screenplay by Dalton Trumbo from the novel, Exodus, by Leon Uris. The Super Panavision 70 cinematography was by Sam Leavitt.

I loved the film in 1960, but in those innocent days, I wasn't to know that much of it was a load of bullshit.

So was much of the special pleading in the Israeli 'Declaration of Independence':

…the Land of Israel, was the birthplace of the Jewish people.

In fact, the Jews only became Jews when a mob of runaway slaves under a charismatic leader left Egypt, wandered a bit, and then invaded the peaceful land of Canaan.

- Here their spiritual, religious and political identity was shaped. Here they first attained to statehood, created cultural values of national and universal significance and gave to the world the eternal Book of Books.

Here, things get a bit mixed-up, between the Hebrew mob invasian of Canaan in about 1200BC, and the Romano-Jewish War of 70 AD, about a millenium later:

After being forcibly exiled from their land, the people kept faith with it throughout their Dispersion and never ceased to pray and hope for their return to it and for the restoration in it of their political freedom.

Impelled by this historic and traditional attachment, Jews strove in every successive generation to re-establish themselves in their ancient homeland. In recent decades they returned in their masses.

Pioneers… and defenders, they made deserts bloom, revived the Hebrew language, built villages and towns, and created a thriving community controlling its own economy and culture, loving peace but knowing how to defend itself, bringing the blessings of progress to all the country's inhabitants, and aspiring towards independent nationhood.

...they made deserts bloom - Zionists established 'Jewish National Forests' on razed Palestinian villages, and made sucker donors pay for them.

...revived the Hebrew language - Hebrew was not spoken by anybody very much between the exile to Babylon in the 6thC BC and the late 19thC AD, when it was revived, specifically as part of the Zionist colonial enterprise. Jesus and most Jews in his time spoke Aramaic.

...loving peace but knowing how to defend itself - lovely piece of irony from an entity that has invaded every single one of its neighbours over the past 40 years.

The League of Nations actually : "explicitly tasked the British with recognizing "the historical connection of the Jewish people with Palestine and to the grounds for reconstituting their national home in that country" and “secur[ing] the establishment of the Jewish national home” while simultaneously safeguarding "the civil and religious rights of all the inhabitants of Palestine.”

This was much the same as the earlier Balfour Declaration, although the Brit promise to the Zionists was a little more protective of the existing inhabitants of Palestine: "it being clearly understood that nothing shall be done which may prejudice the civil and religious rights of existing non-Jewish communities in Palestine, or the rights and political status enjoyed by Jews in any other country".

- The catastrophe which recently befell the Jewish people—the massacre of millions of Jews in Europe—was another clear demonstration of the urgency of solving the problem of its homelessness by re-establishing in Israel the Jewish State, which would open the gates of the homeland wide to every Jew and confer upon the Jewish people the status of a fully privileged member of the community of nations.

Bugger homelessness - more Jews live in the USA than ever lived in 'Israel'.

Did then, and do now.

According to the Jewish Agency, for the year 2007 Israel harboured 5.4 million Jews (40.9% of the world's Jewish population) and the United States contained 5.3 million (40.2%).
The most recent large scale population survey, released in the 2006 'American Jewish Yearbook population survey' estimates place the number of American Jews at 6.4 million, or approximately 2.1% of the total population.
A 2007 study released by the Steinhardt Social Research Institute (SSRI) at Brandeis University presents evidence to suggest that both of these figures may be underestimations with a potential 7.0-7.4 million Americans with Jewish ancestry.

Israeli historian Benny Morris's 1987 book, The Birth of the Palestinian Refugee Problem, chronicled the Zionist murders, terrorism, and ethnic cleansing that drove 600,000-750,000 Palestinians from their homes in 1948, thus refuting the myth that they fled under the orders of Arab leaders. He produced a new edition, revealing more murders, massacres, and rapes, in 2004, and is quoted:

"From April 1948, Ben-Gurion is projecting a message of transfer. There is no explicit order of his in writing, there is no orderly comprehensive policy, but there is an atmosphere of [population] transfer. The transfer idea is in the air. The entire leadership understands that this is the idea. The officer corps understands what is required of them. Under Ben-Gurion, a consensus of transfer is created."

Survivors of the Nazi Holocaust in Europe, as well as Jews from other parts of the world, continued to migrate to Israel, undaunted by difficulties, restrictions and dangers, and never ceased to assert their right to a life of dignity, freedom and honest toil in their national homeland.

This was the kind of intentional heart-rending nonsense (still believed by a host of willing dupes) used to establish the first openly racist state of modern times.

South Africa followed just 16 days after the Israelis:
The South African general election of 1948 was held on the May 26, 1948 and saw Herenigde Nasionale Party leader DF Malan call for the prohibition of mixed marriages, for the banning of black trade unions and for stricter enforcement of job reservation. Running on this platform of apartheid, as it was termed for the first time, Malan and his party benefited from the weight given to rural electorates, defeating Smuts and his United Party.

Nothing as detailed as that Wiki article has been written about Israel's openly racist policies, although Jimmy Carter has done his very diplomatic best.

That's possibly because 'sand niggers' can't dance, play jazz, or have as significant a voting bloc as real black niggers in the US. 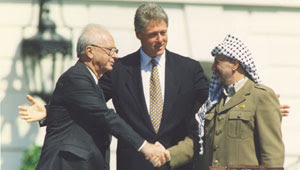 In 1994, there was some real hope. The Oslo Accords were the first direct, face-to-face agreements between Israel and Palestinians.

This was the first time that the Palestinians publicly acknowledged Israel's right to exist. That is, they caved into the colonisation of more than half their land by Eastern Europeans.

It was also a framework for the future relations between Israel and the anticipated State of Palestine, when all outstanding final status issues between the two states would be addressed and resolved.

This arrangement would last for a five year interim period during which a permanent agreement would be negotiated (beginning no later than May 1996). Permanent issues such as Jerusalem, refugees, Israeli settlements in the area, security and borders were deliberately left to be decided at a later stage. Interim self-government was to be granted in phases.

In other words, a Palestinian State was envisaged to be established by May 2001. 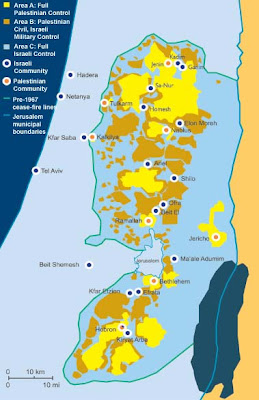 - The assassination of Yitzhak Rabin took place on November 4, 1995 at 21:30, at the end of a rally in support of the Oslo agreements at the Kings of Israel Square in Tel Aviv.
His assassin, Yigal Amir, is currently serving a life sentence for murder plus 14 years for conspiracy to murder Yitzhak Rabin on different occasions and for injuring Rabin's bodyguard, Yoram Rubin. They intend to keep him quiet.

- The Oslo Agreements really gave the Palestinians very little at all, except for nominal rule over certain small areas (A - yellow), but still subject to Israeli Military control over much of their villages, (B - brown), and none at all over the rest (C - blue).

Little Bibi's policy, from then on, followed advice from a bunch of dual-citizen Israeli-Americans: Clean Break.

If you're savvy, you might recognise some of these names as among the NeoCons who got the USA and its poodles, Britain and Australia, into the Iraq morass, another Israeli-American neo-colonialist enterprise that went horribly wrong.
Posted by Richard Parker at 12:17