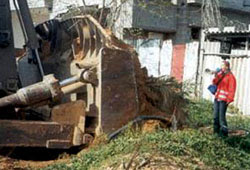 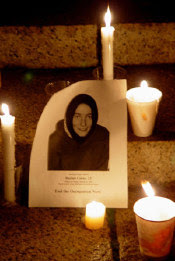 Rachel Corrie was a 23 year old peace activist who was killed on March 16, 2003 when she was crushed by a bulldozer on the Gaza Strip.

Her story was largely ignored in the United States, her homeland.

CanStage, the country's largest not-for-profit theater, has reversed its earlier decision and opted not to present the show as part of its 2007-08 season. The play, about the 23-year-old American activist who died under the wheels of an Israeli bulldozer in 2003, was originally produced at London's Royal Court Theater in 2005.

James Nicola programmed it this year for the New York Theater Workshop, but that production was canceled after resistance from board members and subscribers. Show was eventually produced Off Broadway, where it ran for two months.

"It didn't seem as powerful on the stage as it did on the page," said CanStage creative producer Martin Bragg after seeing the production at Gotham's Minetta Lane Theater.

But in a situation eerily similar to the one that faced Nicola, it appears that Bragg faced pressure from some of his board members not to alienate Toronto's Jewish community.

While admitting he has neither read nor seen the script, CanStage board member Jack Rose said, "My view was it would provoke a negative reaction in the Jewish community."

Philanthropist Bluma Appel, after whom CanStage's flagship theater is named, concurred. "I told them I would react very badly to a play that was offensive to Jews," she said.

Bragg denied he was lobbied by the board in any way and insisted, "I pick the plays. No one on our board has ever told me what we can and can't do."

CanStage posted a $700,000 loss in its most recent season and is facing a struggle as this year it produced 10 plays, none of which met with critical or audience approval.

You can see a very balanced article on the crcumstances of her death in Wikipedia, and judge for yourself who was to blame.

You could also wonder how dramatising her story could possibly 'offend' Canadian Jews, apart from a small Zionist minority.
Posted by Richard Parker at 07:42