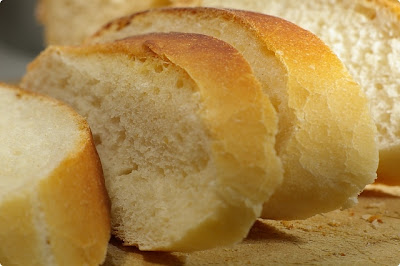 I love bread. I am just passionate about crispy crusted fresh French baguettes, bought hot from the oven, and taken home to eat, still warm and delicious, with great lumps of fresh salted butter (and Mama's marmalade for breakfast, cheese for lunch, and the remainder dunked in soup for supper).

Maybe I told you that I used to stay in Majorca for the summer months, trying to sell ethnic joolery to the tourists, so I had plenty of Mama's marmalade, wonderful local cheeses, and fresh baguettes every morning.

I miss that bread, so I've decided to try and make my own. Starting with the oven. 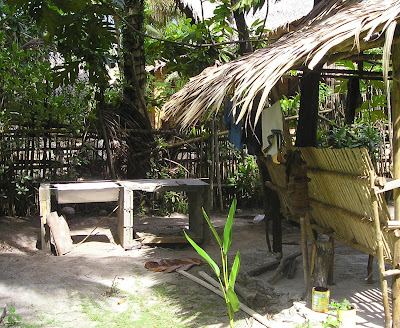 Ron-Ron and Totong have built what they know how to do, a construction of hollow blocks and a concrete platform, with a bit for the barbecue on the left.

On top of the concrete shelf to the right, we're going to build the kind of clay beehive oven used throughout most of Europe and Asia over the past 5000 years.

Next problem is how to actually make the oven. We don't have bricks at all here, let alone fire bricks, so we've had to make do.

R-R and T-T went off to the carabao wallow up the road, and dug up 10 sacks of clay. I've been looking up oven-making on the internet, so I'll be able to direct them to make it correctly. Then they'll just go ahead and make it in their own way, and it will, as always, work much better than if I had had any serious part in it.

It will be a clay/earth dome, with a flat floor, and a front door. We'll work things out as we go along. I just wish I still remembered the tribal wisdom of those 5,000 years of making ovens. 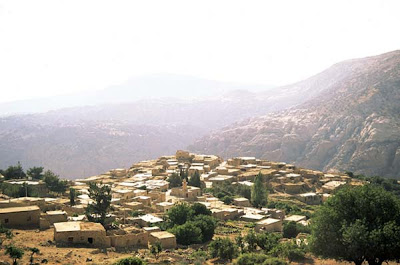 The best bread I ever ate, in my life, was in Dana, a small village in Jordan, just off the edge of the escarpment that leads down to the Wadi Araba, the section of the Great Rift Valley that leads from the Dead to the Red Sea.

At that time, the village hadn't been 'gentrified', as in this photo. Most of it was in ruins, because the inhabitants had moved up to the top of the escarpment to be nearer the modern world.
Since then, my old friend Anis Muasher has turned the whole valley into a wonderful national park. It was so left behind by the turbulent history going on all around it that it remained wild. In the 1980s, I'm told, a leopard was sighted there.
Otherwise, the villagers were still living the life their ancestors had, 2, 3, 4, or 5000 years ago. My son and I had fresh khubbes baked in an oven that had probably been in the house for a couple of millenia.
I want to make bread at least as good as that.
Posted by Richard Parker at 15:14