This is a cooperative musical movement for peace, worldwide, well worth watching, and listening to.

Posted by Richard Parker at 19:06 No comments: 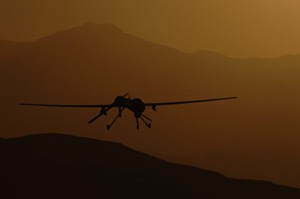 Can you imagine how you might feel, when this 21st century robot dragonfly is hovering over your town or village, and may be about to unleash Hellfire Missiles?

Of the 44 Predator strikes carried out by US drones in the tribal areas of Pakistan over the past 12 months, only five were able to hit their actual targets, killing five key Al-Qaeda and Taliban leaders, but at the cost of over 700 innocent civilians.

This is not only immoral, but involves incompetence and carelessness at a gross level.

According to the statistics compiled by Pakistani authorities, the Afghanistan-based US drones killed 708 people in 44 Predator attacks targeting the tribal areas between January 1 and December 31, 2009.

For each Al Qaeda and Taliban terrorist killed by US drones, 140 innocent Pakistanis also had to die. Over 90 per cent of those killed in the deadly missile strikes were civilians, claim authorities.

The success percentage for the drone hits during 2009 was hardly 11 per cent. On average, 58 civilians were killed in these attacks every month, 12 persons every week and almost two people every day. Most of the attacks were carried out on the basis of human intelligence, reportedly provided by the Pakistani and Afghan tribesmen, who are spying for the US-led allied forces in Afghanistan. (ie people who are waiting their rewards for being snouts).

The drones themselves are based close to their targets (such as at Bandari Air Base, Pakistan), but are controlled by video games players elsewhere 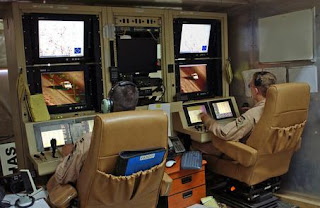 These wallies are sitting comfortably in their 70s style office chairs, looking at a scene maybe 5000 miles away, and using their judgement alone to apply instant death.
Posted by Richard Parker at 08:23 2 comments:

The Noughties (zero = nought in English English) were fairly traumatic, but especially for America, which is showing definite signs of its final decline as a global empire.

I have essentially ignored my own country, Britain, which behaved, under the governorship of America, exactly like a colony, throughout 10 years. So this is biassed towards America.

Here are 12 events that, I think, defined the decade:

1. Millenium Terror. Known plots to attack Los Angeles International Airport, the Amman Radisson Hotel in Jordan, several religious sites in Israel and the USS The Sullivan Brothers at dock in Yemen; all prevented during the last year of Bill Clinton's presidency

2. Bush election 2000. 'Won' against an opponent who gained a 420,000 majority of popular votes, by shenanigans in Florida, and his father's Supreme Court's final decision.

3. "9/11" I watched this event for 24 hours after seeing views of the first burning tower, and the poor BBC girl who didn't even notice as the second plane.slammed into the South Tower. It was shocking, and it was to define the decade. At the same time GW Bush was sitting, dumbly, in a Florida school, and, later in the day, criss-crossing the country in fear. (Although the Secret Service did absolutely nothing to protect him in the first few moments after the initial news - I wonder why?). In the very first hours, the media were blaming 'Al Qaida' and Osama bin Laden for it, and Dick Cheney was planning attacks on Iraq.

4. Invasion Afghanistan 2001- Bush immediately adopted the cowboy attitude: "Anyone who is not with us is against us". He even suggested he might be a "Crusader". America, and a handful of 'Coalition Allies' invaded, and with the help of massive bombing, and the Uzbek/Tajik 'Northern Alliance' of Afghan warlords, ousted the Taliban government within weeks. America is still fighting this war 8 years later, and losing.

5. Patriot Act 2001- Surprisingly, this draconian Act, with its over-riding widespread restrictions on many American civil rights laws, was already fully prepared for voting and signing, within 6 weeks of the attack, and voted into law, overnight, by traumatised representatives. There was no prolonged discussion in Congress or the Senate.

5. Iraq 2003 - The Bush Bunch set its eyes on Iraq from the beginning, America having already imposed, for a decade, stringent sanctions that killed half a million Iraqi children. The decison was made a year before the initial attack, and a major campaign of lies and half truths mounted to justify it. It was to be a 'cakewalk' with 'Iraqis greeting American liberators with bunches of flowers'. It wasn't. The first weeks between the staged overthrow of the evil dictator's statue and 'Mission Accomplished' announced by flyboy Bush, went OK, but then it went seriously wrong when L. Paul Bremer, a highly over-educated bureaucrat, was put in charge, and de-'Baathised' Iraq, dissolving the Army and sacking most competent government officials.

This led to rapid deteroration, and we have all seen the story of what happened since.The Americans are still there, six years later (but promise, honestly, to leave fairly soon)

6. Abu Ghraib 2004 - The actual photos of American torture at Saddam's former hell-hole prison were a shock to the gullible world, who may have still still believed that Americans could do no wrong. That was only the tip of the iceberg. Much worse things were going on.

7. Election 2004 - With unverifiable and hackable electronic voting machines brought in to replace 'hanging chads' it was a foregone conclusion that George W Bush would win. He did.

8. Katrina 2005 - the major American city of New Orleans was hit by a bit-more-than-regular typhoon, but its levee defences had been neglected for years, and it was inundated. GWB did precisely nothing, except congratulate his man,Michael D. Brown, head of FEMA, for a "Heck of a job"

The people displaced by the floods were generally neglected, and still are. But then, they are only niggers.

9. Bubble Bursts 2008 - In 2008, the financial shit finally hit the fan; events which anyone with a brain might have foreseen, in view of the obvious bubbles created, and ignored, during the Nineties and the Noughties. Banks collapsed overnight. Bear Stearns and Lehman Brothers went first, followed closely by Washington Mutual. Merrill Lynch (the famous 'Thundering Herd') was forcibly sold to Bank of America. TARP was quickly organised, in cahoots with the banksters, at gunpoint, and handed over oodles of money ($700 billion dollars) to the remaining banks, to persuade them to ease credit restrictions on real businesses.
Of course, they didn't do this; they kept the money for their gambling pots and splurged out again on new financial 'products', to the benefit of no-one but themselves. The year 2009 brought them rich pickings.

11. Hannukah Massacre 2008-9. With exquisite timing, the Israelis launched a devastating and criminal attack on its prisoner population of 1.5 million in Gaza. It was timed almost exactly between Christmas and the inauguration of the new, hopeful, US president. Obama said nothing relevant during the attack, and has since worked against the Goldstone Report on Israel war crimes and crimes against humanity.

12. Decline of America 2009. I'm not absolutely sure that 2009 was a tipping-point in America's precipitous decline as a world empire, but there are certainly suggestions:
- Treasury Secretary Geithner goes to China, cap in hand, to plead that they won't drop buying US bonds.
- China buys a pipeline from Central Asia completely by-passing US war zones.. They didn't go to war. Oil supplies (and the war in Afghanistan) are major objectives of the Bush/Obama strategies.so this was a set-back.
- China buys a copper mine in Afghanistan, without fighting for it.