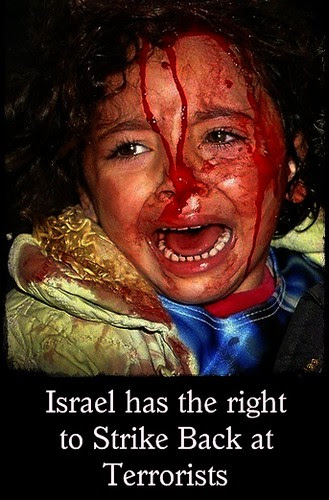 Child of Gaza, originally uploaded by smallislander.
I published this photo on Flickr on January 4th 2009, after a few days of the Hanukkah Massacre, Since then, it's had over 2000 views, which is quite something for a photo-sharing club.

The original photo is by Fady Adwan of Getty Images. I added only a title.
Posted by Richard Parker at 19:42 1 comment:

I published this photo on Flickr on January 4th 2009, after a few days of the Hannukah Massacre, Since then, it's had over 2000 views, which is quite something for a photo-sharing club.

The original photo is by Fady Adwan of Getty Images. I added only a title.
Posted by Richard Parker at 19:32 10 comments:

On Friday October 16th, 2009 in Geneva, the UN Human Rights Council finally endorsed the Goldstone Report, after an earlier Keystone Cops deliberation failed to do so. The panel investigated war crimes during the Gaza war earlier this year. Oddly though, the Council refused to include in its endorsement any reference to possible crimes of the Palestinians during that conflict, singling out only Israel for fault. Such one-sidedness provided Israel with further ammunition to claim the Council (and by extension, the Report) is one-sided and prejudiced against it. That caused Richard Goldstone to criticize the Council.
(Plagiarised from: http://www.richardsilverstein.com/tikun_olam/2009/10/16/un-human-rights-council-endorses-goldstone-report/)

Don't forget that Goldstone is Jewish and a Zionist. As a professional judge, he put that aside, and reported on the facts.

This means that Goldstone's report may be taken seriously by many members of the UN. (Not, of course, by the US, which will veto any further progress or action, but by the 2nd and 3rd world nations, most of whom have got fed up with the US bossing them about, and actually don't give much of a chickenshit about Israel/Palestine ).

Israel is losing credibility by the day.

If the grinning snake who 'leads' Israel tries a bit harder; (and he doesn't' need to do too much
to roll over his senior financial (but junior political) partner, the US, on this and the Iran 'problem'), then he could very well over-step.
Posted by Richard Parker at 19:09 No comments:

The report from Richard Goldstone's group (15-09-09) on the Hanukkah Massacre of Gaza in Dec-Jan 2009 was absolutely devastating to Israel's claim that it has the 'most moral army in the world'.

The report details, in straightforward international legal terms, more than 30+ war crimes, or crimes against humanity. (Those are internationally accepted legal terms, not mine)
Goldstone's report reinforced a number of reports after January 2009 that detailed, graphically, what devastation the 'most moral army in the world' wreaked on an essentially defenceless population, hemmed in, and not allowed to escape.

The full report is available at:

There are several facts about Goldstone himself that are worth noting:
- He is Jewish, and and a Zionist, and serves on the board of the Hebrew University. Hardly someone to accuse of 'anti-Semitism'.
- He has had a distinguished career as an international jurist, adjudicating in South Africa, plus war crimes in the Balkans, and Ruanda. He knows the difference between a war crime and a crime against humanity, which you and I may not.
- He himself insisted that his brief include investigations of Palestinian 'war crimes' as well. However, they turned out to be so minor that they pale into insignificance against Israel's premeditated attack on 1.5 million trapped civilians.

Read: http://ingaza.wordpress.com/ by Eva Bartlett, who was in Gaza throughout the 'war' and has been there in the aftermath, and is still struggling to do her good work 9 months later.

If you thought that invasion finished in January 2009, and that peace reigns, you're very much mistaken.
If you can. please donate some cash to keep her doing her good work.
Posted by Richard Parker at 08:36 No comments:

I decided, just yesterday, at last, to revive this weblog. It's about time to stop being a passive recipient of news and blog reports, and become a bit more active.

I propose to start to write a new blog entry at 10am every morning (Taipei time). This, like most New Year resolutions, will probably die very quickly, but is part of a personal reset that might reintroduce some discipline into my life.

I read certain (mostly "political") private and newspaper reports and weblogs every morning to get a sense of the world's situation, and most of them don't reinforce any optimism about our future.

So, I will take a daily theme, and run on it. And try to be positive.

If I can't find a daily theme, I will talk about local life, nature, or whatever, on the small island of Siargao, on the far right hand side of the Philippines
Posted by Richard Parker at 08:11 No comments: