This spring, the local people voted in a surprise new Mayor, Felipe 'Ping' Espejon, ousting Jaime Rusillon, who had been the very strong mayor (or Mayor by proxy) for the previous twenty-five years.

I hoped this might lead to a new, more active local government. Dear old Jaime had done a remarkable amount of good for the town, but, frankly, he was getting a little old and tired (we are separated in age by little more than a fortnight, and God knows, I wouldn't want to try and keep this bunch in order).

There were signs of reforms; the local government workers started showing up for work, and you could even go to the Post Office in the municipal building and actually find the postmaster present and awake. Even the police showed some energy, and were awarded a brand-new police station, between the Municipal and the Boulevard.

And he began some consultations; but entirely in the wrong way, not consulting the people, but special interests. I imagine he got this from spending many years in America.

For instance, he allowed my odious neighbour, Andreas Mikoleiczik, of Patrick's resort, to invite him for a meeting, at the resort, of selected resort-owners (selected in the sense that only a small minority of them would go anywhere near Andreas).

The subject of 'The Boulevard' came up. Like all resort-owners anywhere, they would prefer to keep their punter/tourists, and their spending, within their control.

In April 2005, Jaime opened the 'Paseo de Cabuntog', a seaside boulevard with bayan kubos for families, benches, a seawall, etc., along the seafront from the market to the creek, with a new walkway across the creek to another cleared seafront area in front of the Mabua village.

It was a huge success; the first time that anyone had ever offered the townspeople, and purposely built, a public space for their own use.

Later, the town council rented spaces to small entrepreneurs along about 60m of the back of the area. Most of them built their own small cabins, and set up combo bar/karaoke/ Filipino 'fast food' joints.

The Boulevard (no-one called it the Paseo de Cabuntog) soon became the evening entertainment area of the town, with a constant stream of young and old townspeople coming to have fun.

Filipinos love karaoke, and most have an entirely mistaken idea that they are good singers. The resulting cacophony of bars competing on volume (with very poor tone control, feedback screeches, etc) was terribly and truly awful, but it was possible to consciously ignore it when passing by.

There were problems with drunks, fights, and so on, but that is quite normal, and the Boulevard is just on the doorstep of the new police station. (I never, ever saw a policeman in uniform patrolling the Boulevard in the evening; that was probably outside working hours, or during one of the many evening drinking parties we saw in the police station, from Lalay's just next door). 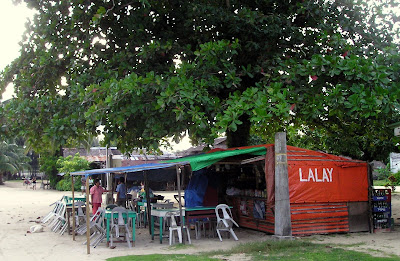 Lalay set up a restaurant/bar at the end, by the market, underneath the town's huge talisay tree, and this soon became a very popular foreigners' bar and food place. You could buy fresh fish from the market opposite, and Lalay would cook it for you, for a pittance, or you could have some of what Lalay had found for himself earlier in the day (prawns, fresh fish, crabs, etc).

Soon, visitors to resorts at Cloud 9, 4 miles away, were coming to Lalay's for their evenings. Many of those ripped off at Patrick's-On-The-Beach (nearer the town) also ate there.

Lalay's became an institution. The Old Farts Club (including me) of long-term GL foreign residents met there every evening.

Now it's gone. Lalay's and all those cacophonous karaoke bars (which I personally hated, but tried to accept because the townspeople loved them) have been cleared out.

The Boulevard now, at night, is a ghost town.

The crusading new mayor has not only destroyed the spirit of the major public space for the town, and alienated many of the townspeople, but he has pissed-off all the regular foreign residents as well.

And all for the sake of a 'crusade' that might have been influenced by a hypocritical 'Christian' phony like Andreas - it makes my blood boil.
Posted by Richard Parker at 09:32