U.S. Constitution: First Amendment
Congress shall make no law respecting an establishment of religion, or prohibiting the free exercise thereof; or abridging the freedom of speech, or of the press; or the right of the people peaceably to assemble, and to petition the Government for a redress of grievances.

Well the government can't prohibit people from speaking out, but others, and particularly the Israeli Lobby, can, and do so with extraordinary effectiveness and impunity. 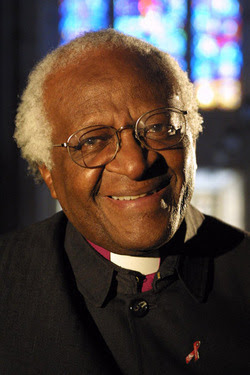 Archbishop Desmond Tutu has just been dis-invitated from speaking at a US university because of something he once said about Israel.

As recently as last year, after the Israeli Defense Force, during a heavy shelling of the village of Beit Hanoun, massacred 19 civilian Palestians, mostly in one apartment block, the UN Human Rights Council set up a fact-finding mission, to be led by an impeccable and highly respected international public figure.

The mission was charged with investigating a botched Israel Defense Forces shelling in Beit Hanun which killed 19 Palestinian civilians.

So the US Israeli Lobby got to work, with its usual toxic competence:

If you read that report, note that it is from a highly respected Israeli newspaper, which is a great deal freer to criticise the Israeli government than any US newspaper.

Then, to add insult to injury, the US Israeli Lobby concocts this:

..... in a move that still has faculty members shaking their heads in disbelief, St. Thomas administrators—concerned that Tutu's appearance might offend local Jews—told organizers that a visit from the archbishop was out of the question.

"We had heard some things he said that some people judged to be anti-Semitic and against Israeli policy," says Doug Hennes, St. Thomas's vice president for university and government relations. "We're not saying he's anti-Semitic. But he's compared the state of Israel to Hitler and our feeling was that making moral equivalencies like that are hurtful to some members of the Jewish community."

St. Thomas officials made this inference after Hennes talked to Julie Swiler, a spokeswoman for the Jewish Community Relations Council of Minnesota and the Dakotas.

"I told him that I'd run across some statements that were of concern to me," says Swiler. "In a 2002 speech in Boston, he made some comments that were especially hurtful."

During that speech, titled "Occupation Is Oppression," Tutu lambasted the Israeli government for its treatment of Palestinians in occupied territories. While a transcription clearly suggests his criticism was aimed at the Israeli government ("We don't criticize the Jewish people," he said during the speech. "We criticize, we will criticize when they need to be criticized, the government of Israel"), pro-Israeli organizations such as the Zionist Organization of America went on the offensive and protested campus appearances by Tutu, accusing him of anti-Semitism

What he also said was:

If that is comparing the Israelis with Hitler, then the comparison certainly fits.

Swiler is, of course, the local hasbara agent.

Thanks to: Desertpeace, Minneapolis/St. Paul City Pages, Muzzlewatch, whose articles you should read to get a real sense of just how ridiculous and evil the practice of defending Israel against the indefencible is becoming.