The most moving exhibit at the Yad Vashem Holocaust Memorial in Jerusalem is the floor of the first building you enter, the Hall of Remembrance, under a lowering boulder-topped door. It is like a severe chapel, with a dark floor panelled with large tiles. Each is lit with a single downlight, and each just records a name of a concentration/extermination camp in Hebrew and English: 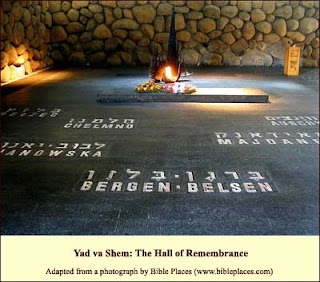 I seem to remember that when I first saw this floor, in 1973, each name had a number below it; the number of Jews supposed to have been exterminated in each camp. The numbers have gone, presumably as the "Holocaust Myth" is examined more closely.

After you've seen this, leave. The rest of the 'Museum' is like a Disney/Madame Tussaud's "Holocaust-Horror" exhibition.

No-one, as yet, has produced a 'Yad Vashem' for the Palestinians, but someone has come up with the next best thing:

A map of Palestine showing exactly what has been ethnically cleansed, settled, etc, during and after the Great Ethnic Cleansing = Nakba of 1948.

We have compiled the most complete mapping of Palestine ever (over 5,600 placemarks have been identified), however, to view our presentation Google Earth should be installed. Our presentation includes the following:

Go there look at a few forgotten village sites, and see just what happened after 1948. Worst of all go around the 'West Bank' and see what's happening right now.

And then look at the diary of a Jewish returnee