You CAN Fool All of the People All of the Time...Or, At Least, You Can Try 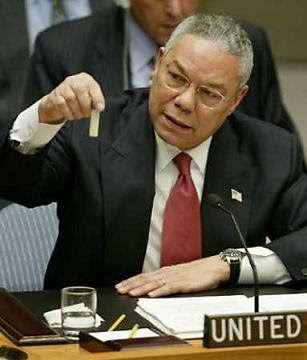 Déja vue, all over again.

Remember George Bush's House Nigger at the UN in February 2003?
Good old Coe-Lin almost convinced everyone that the blatant lies being told about Iraq's Weapons of Mass Destruction were true. 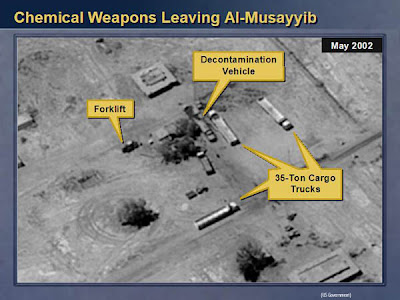 Of course, there was no actual evidence of anything remotely resembling Chemical Weapons, and no evidence that the photograph wasn't, in fact, taken in Kansas or Texas.

This is the supposed site of the Syrian/North Korean reactor, attacked by Israel on 6th Sept, 2007, in a very hush/hush mission from which their US-supplied fighter-bombers returned in a great hurry, after dropping a fuel tank, embarrassingly, in Turkish territory.

ABC News released, on October 19th 2007:
EXCLUSIVE: The Case for Israel's Strike on Syria
Israeli officials believed that a target their forces bombed inside Syria last month was a nuclear facility, because they had detailed photographs taken by a possible spy inside the complex, ABC News has learned.
The official described the pictures as showing a big cylindrical structure, with very thick walls all well-reinforced. The photos show rebar hanging out of the cement used to reinforce the structure, which was still under construction.
The official said the facility was a North Korean design in its construction, the technology present and the ability to put it all together."

Devilish Syrians - first of all they change the shape of the building from round to square, then they vanish it. Must be doing something suspicious!

The news pimps have been making great hay out of the fact that the heavily-bombed site was cleared up within 6 weeks. That, for a bunch of wogs, is incredible. It took the great USA 2 years to clear up the Twin Towers, and more than that for Katrina.

The Syrian 'Potential Nuclear Reactor' is certainly (round or square) of Korean design, as can be seen by comparing its amazingly close likeness to this photo of North Korea's notorious Yongbyon plant, by the same ISIS/DG group: 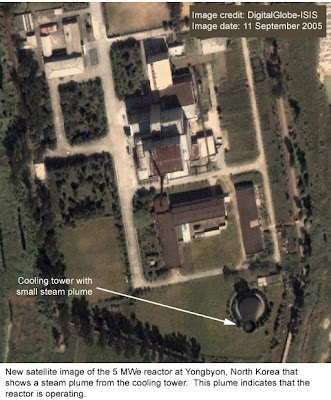 Note how closely the two square buildings resemble each other.

The authors of this codswallop (David Albright and Paul Brannan of the Institute for Science and International Security [sic]) actually publish some very fuzzy photos in their PDF report showing how the Syrian building somehow matches in size, metre for metre, the entire central complex at Yongbyon.

David Albright's done this before:
The bottom line with regard to ISIS and Hamza is this: Hamza is introduced to ISIS by Chalabi; Albright of ISIS takes him on. Hamza later lies to Senate committee and later continues to feed on the lies to the OSP at the Pentagon. Albright gets cold feet and by 1999/2000 starts back-pedalling to put as much distance between himself, Hamza and the Iraqi nuclear story as he can. Prior to 1999 ISIS and Albright were quite happy to perpetuate the myth of an Iraqi nuclear bomb – they knew it wasn’t going anywhere under the Clinton administration – just as they are trying to perpetuate the myth of an Iranian nuclear bomb today without any evidence whatsoever.
Albright and his ISIS organisation were wrong about the Iraqi bomb in the late 1990s and have no credibility. After the Gulf War Saddam was completely boxed up and could barely get a SCUD missile to fly in a straight line let alone have a nuclear program. Albright knew that. He knew that both as a weapons inspector and via his research work heading up ISIS later on yet still, up until 1998 at least, was perpetuating the myth of the Iraqi nuclear bomb. Just taking on Hamza in the first place tells the story in itself.
Iran has no plans for nuclear weapons and neither Russia nor China would be allowing Iran to become nuclear armed. This entire Iranian nuclear weapons beat-up is simply a US/Israeli propaganda story designed to prepare the world for an attack on yet another sovereign nation that they perceive are its enemy. Webdiarists might like to make judgements for themselves on this matter.
Posted by Richard Parker at 07:40

I think that is how the sapiens (Abe's gang) got the neandertals (err, canaanites) to leave their sea shore property at Mount Carmel.

But then, that's probably how the neandertals got it from whatever hominids were there before.

Say, do you think that ochre & ghee/cocoabutter used by so many old tribes was just a sunscreen? Maasai use it, Himba use it in Namibia (and never shower), neandertals used it, who didn't? Ochre must have been equal to clothing in some way. bug screen? iron supplement? sweat retainer (less water consumed)? All of the above? Did Philippinos use it on skin? Ochre was hugely popular for a long time, used by all the races before clothing styles changed with treks further north I'd guess. Ochre body paint seems to correlate to body welts, while ash/ink tattoos were maybe used where no ochre existed (Polynesian isles with low iron). (Guess I'll copy this part to AAT)