Someone in Israel Has a Heart (Caution: He's a Lawyer)

Yahoo News by Charly Wegman
Mon Oct 29, 5:10 PM ET
JERUSALEM (AFP) - Israel's attorney general said Monday that planned punitive cuts in electricity supplies to the Gaza Strip can not go ahead before a full assessment of the possible humanitarian consequences.
Menahem Mazouz, who is also the government's legal adviser, said in a statement that "security chiefs must carry out supplementary examinations to take account of the humanitarian obligations before ordering electricity cuts."
A spokesman for Mazouz's office, Moshe Cohen, told AFP there was a need to "evaluate the risks that such measures could have on the civilian population."
Mazouz published his advice following close consultations with officials from the justice, defence and foreign ministries as well as the prime minister's office and the supreme court.
The supreme court has given the government until Friday to justify the economic sanctions it is seeking to impose on the Palestinian territory, following legal action taken by 10 human rights groups.
Israel on Sunday began reducing the amount of fuel it supplies to the beleaguered Hamas-run coastal strip, just weeks after it declared the territory a "hostile entity" in response to frequent but rarely lethal rocket attacks.
It has said it intends to impose electricity cuts within the next few days and earlier on Monday rejected criticism of its decision from the European Union, United Nations, and Russia.
"Israel is continuing to maintain the flow of humanitarian support for the Palestinian people in Gaza -- foodstuffs, medicine, and energy. We do not see the Palestinian people as our enemy," Mark Regev, a foreign ministry spokesman, told AFP. Bullshit - this wanker talks this crap "just weeks after it (Israel) declared the territory (Gaza Strip) a "hostile entity"
"What we are trying to do is find ways to protect our people from these daily attacks of deadly rockets against Israel," he added. "Our response is proportional and calculated to protect our civilians." Bullshit - compare the numbers of Israelis killed or injured in Sderot with the numbers of Palestinians killed or assassinated in Gaza
UN chief Ban Ki-moon called the "punitive measures" against the Gaza Strip "unacceptable" and urged the Jewish state to reconsider its actions.
Russia lodged a similar complaint, with the foreign ministry condemning the "isolation" of the Palestinian territory and insisting the measures would do little to combat extremism.
Earlier on Monday a top EU official expressed similar concerns.
"I have mentioned these concerns openly in all my discussions," External Relations Commissioner Benita Ferrero-Waldner told a news conference following talks with top Israeli officials.
"There are indeed real, humanitarian concerns. We do not want the population to suffer," she said, adding that she understood the threat to the Jewish state posed by the frequent rocket attacks launched on southern Israel.
Regev rejected charges that the measures constitute collective punishment, insisting that Israel had the right to defend itself. Bullshit
"Ultimately the ongoing bombardment of the Israeli civilian population in the south -- a deliberate and ongoing policy to try to kill innocent civilians -- is a war crime," Regev said. Bullshit
"Israel is justified under international law in acting to protect our population. That is our obligation as a government." Bullshit

Mark Regev (Hebrew: מרק רגב‎) is the spokesman of the Israel Ministry of Foreign Affairs. Prior to occupying his current post, he has served as Deputy Chief of Mission at the Consulate General in Hong Kong, Spokesman at the Embassy in Beijing and at the Jordan Division at the Foreign Affairs Ministry in Jerusalem, and as a professor of International Relations and Strategy at the Israel Defense Forces' Staff College. 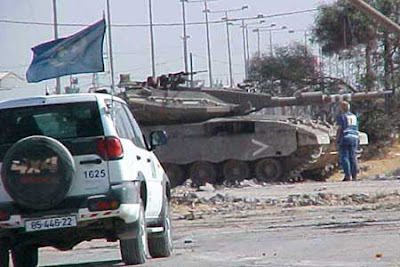 And this photo: "June 2003. UNRWA Operations Support Officer approaches an Israeli tank on the only remaining road between Erez and Gaza city in order to negotiate passage of an UNRWA convoy carrying UNRWA staff living in Beit Hanoun to their work places in Gaza City.