Sderot - Sacrifice a Few Immigrants for The Cause?

Let's get these deadly Palestinian rocket attacks into perspective.

Israel has a policy of establishing front-line, development towns where brave, courageous Israeli colonists can confront the 'Arab Peril'.
Sderot is one such.
It was set up as a front-line town, and it gets attacked, as it was planned to be. That's why Sderot's population is half recent Russian immigrant, and half Sephardi (Moroccan and Persian Jews). Not a brave Ashkenazi or Sabra in sight.

The Gaza Strip (not worth calling it anything more than a strip) is nothing more now than a refugee concentration camp where about half the Palestinians expelled from 'Israel' in 1948 ended up, in places like Jabalyah, Khan Yunis and Rafah refugee camps. There are 1.5 million people confined to 300sq km.

They are not allowed to leave Gaza, even for emergency medical care, or if they do, to return.

At least two generations of refugee peasant farmers, kicked off their land, have ended up in Gaza, with nothing much to do, no education, no jobs, and damned little hope.

Just consider the position of the two towns - they are just 2km apart, separated by (you can see it here for yourself) the most effective people-killing wall/zone since the Berlin/East Germany one.

Take in a few details: 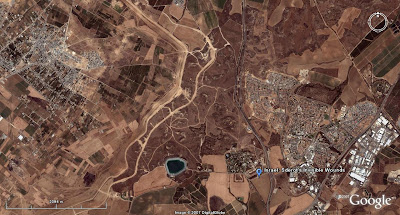 - The undeveloped Arab town of Beit Hanoun to the left, with its tiny peasant fields around.

Beit Hanoun (Arabic: بيت حانون) is a city on the north-east edge of the Gaza Strip with a population of 35,000. It is administered by the Palestinian Authority. It is located by the Hanoun stream, just 6 kilometers (4 mi) away from the Israeli town of Sderot. As opposed to nearby Gaza City, its population is almost entirely of Bedouin descent. More than 5,000 of its residents are part of the "Zaneen" tribe.
The area is notorious in being the source of the launching of many Qassam rockets attacks by Palestinian militants against Israel, over the security fence.
This town is also notable for the Beit Hanoun November 2006 incident where 19 Palestinians were killed by IDF shelling. According to Israeli authorities it was in response for its use as a base from which Palestinian militant groups have fired Qassam rockets into the northern Negev towns like Sderot, as well as the former Gush Katif settlements.
In December 2006, the UN appointed a fact-finding commission led by Anglican Archbishop Desmond Tutu to investigate the attack. However, Tutu and the other members were not granted permission to travel by Israel and the investigation was cancelled.
The Palestinian Authority alleges that prior to the November 2006 incident, at least 140 Palestinians were killed by Israeli Forces in Beit Hanoun from September 2000 to November 2006.

- The New Town of Sderot, paid for by contributions by (mostly) American Jews or the US Government.
The first inhabitants of Sderot arrived in 1951 to what was then known as the Gevim-Dorot transit camp. Most of these residents were Kurdish and Persian refugees who lived in tents and shacks before building permanent structures almost four years later in 1954. In the 1961 census, the percentage of North African immigrants, mostly from Morocco, was 87% in the town, whilst another 11% of the residents were immigrants from Kurdistan. In the 1950s, the city continued to absorb a large number of immigrants from Morocco and Romania, and was declared a local council in 1958.

In the 1990s Sderot again absorbed a large immigrant population from the former USSR, and doubled its population in this decade. In 1996 it was declared a city. According to CBS, in 2001 there were 9,500 males and 9,700 females (about half the population of its Palestinian twin, Beit Hanoun)
Sderot lies a kilometer from the Gaza Strip. Since the beginning of the al-Aqsa Intifada in October 2000, the city has been frequently attacked by Hamas and Islamic Jihad militants using homemade rockets known as "Qassam rockets". Although they are very inaccurate, these attacks have resulted in a number of deaths and injuries as well as significant damage to homes and property, psychological distress among the residents, and a net emigration from the city. The Israeli government has installed a "Red Dawn" alarm system in an attempt to alert Israelis to possible shellings, though there are doubts concerning its effectiveness. Thousands of Qassam rockets have been launched from the Gaza Strip since Israel's disengagement from Gaza in September 2005.

How would you feel if a bunch of Russian immigrants were dumped in a brand-new town just a mile across an uncrossable border within your own homeland, and given huge subsidies as 'Jewish' immigrants, while you were left to rot in a prison?

But the score is pretty even - 16 victims in Sderot, over 6 years, versus 19 in Beit Hanoun, with just one shell, beside the 140 Palestinians killed in Beit Hanoun over those same 6 years.

An eye for an eye? Now the Israelis are besieging the entire 1.5 million population of the Gaza Strip, with the compliance of the EU, Britain, the US (all the usual suspects).
Posted by Richard Parker at 12:56