How to Become a Perfectly Respectable Terrorist

Just suppose that you would like to travel abroad, undertake intensive military training and further learning in a foreign language, and be, as much as possible, indoctrinated with the policies of the rulers of a state which is despised and hated by a majority of the world.
Would you not expect, when you returned home, to be at least suspected, and perhaps questioned by the security authorities?
If you were a member of certain religions, or spoke certain languages, you might even find yourself doing indeterminable time in Guantanamo, or even 'disappeared' to another country altogether, where you could be tortured or worse?
You could even, while you were on your way home via a third country, be kidnapped, or even murdered, by secret US, British or Zionist agents just for your expression of interest in undertaking such intensive military training and further foreign language learning.
It's happened often before, to totally innocent people.
It could happen to you.
Anytime.
You might even find yourself facing trial on trumped-up charges of conspiring to cause terrorist incidents, based mostly on evidence of such miltary training abroad, as many unwitting people have found. 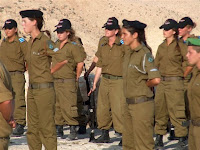 Not if the foreign military training and language studies are given in Israel, though.

The World Zionist Organisation organises such courses for foreign youths aged 18-28, several times of year in the Negev, in Israel.
Their organisation, Marva, advertises openly and freely. Amongst its published answers to FAQs are:
- One of the great forces in the Israeli experience is the army. It is one great leveler and probably the best tool for absorption of new immigrants. Yet in most western countries the word Army bring out negative connotations.
- The goal of Marva is to expose foreign students to the complexities of the problems and challenges facing the Israeli Army, and the role of the IDF within the framework of Israeli society. It must be emphasized that one who does Marva is not doing army service and is no way part of the IDF.
- The course is open to any Jew who is interested in learning about the IDF. You do not have to think about Aliyah or army service. During the course participants will have to deal with army disipline [sic], the challenge of the mind will be harder than the challenge of the body.
- You will learn, topography, campcraft, history, celestial navigation, as well as current events and their effect on the army and riflery. You will visit army bases and see army projects with other sectors of Israeli society. For around 6 weeks of the program you will be "on the road," including one week at the Wingate Institute for physical fitness training.
- Most of all you will learn how to act as a group and how to help others in your unit to achieve a common goal - as such you will learn the true secret of the Israeli army moral and team cooperation.
To apply, contact:
Marva Program, Tnuat Aliyah, Shmuel Hanagid 7, POB 92, Jerusalem 91000
ilanaka@jazo.org.il, (972)2-620-4407
Now, I consider all of that quite breathtaking hypocrisy, and the tolerance of such double standards during the 'Great War on Terror' almost unbelievable.
Do you?
See a not-very-convincing defence of Israel's aims, with its Marva programme, here. This includes the usual Zionist propaganda phrases:
...compare them with programmes run by terror organisations is just wrong. These camps indoctrinate children as young as five to hate Jews and Westerners, to venerate a culture of death and teach them that killing civilians is not only acceptable but desirable.
I saw, more than 30 years ago, young Palestinian refugee youths (all male) undergo 'cadet' training in Lebanon. That was, of course, before Israelis invaded their adopted country twice, and attempted to reduce it to bombed-out rubble in the summer of '06.

But don't try to find out more about Marva at the World Zionist Organisation site here.
Google is nothing if not up to the minute, technically, and will give you the message:
Marva
This site may harm your computer.
Posted by Richard Parker at 07:35