Turning Tayang Tayang into a Delicacy 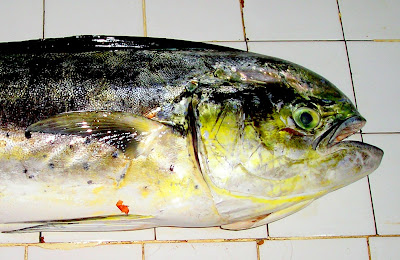 This fish is known locally as a Tayang-Tayang, although since some Hawaiian surfers came here, some have started to call it Mahi-Mahi.

The more knowledgeable among you will know it as the Dolphin Fish or Coryphaena hippurus.

The fish lives in warm waters worldwide. In Malta it is known as Lampuki, and is fished by nets set out at right angles to the coast, the kannizzati method. The fish like to assemble under floating objects, where they can catch and eat smaller fish. The Maltese have a Lampuki season in the autumn, and one of the absolute must-eats at that time is Lampuki Pie, made with Lampuki steaks bolstered with vegetable, onion, and tomato sauce, and enveloped with red wine and olive oil pastry. We're going to try that just as soon as I've built my wood-burning (coconut shell) oven. 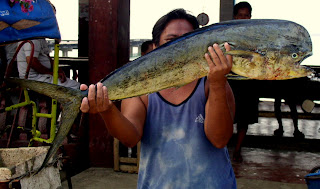 But I bought one this morning from the market just for smoking. I took just the 4.5kg front half, that cost me just $7, at $1.50 per kilo.

The fish's head will be made into soup, and the scraps from that will be Shiloh the dog's dinner.

I marinated the steaks in oil, soy, honey, pepper and salt, and they're smoking up nicely right now. 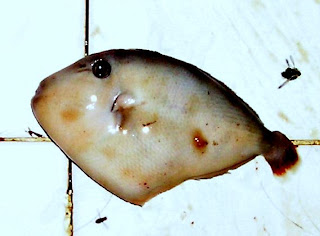 I didn't really mean to find this small trigger fish, that somehow fell out of the Tayang-Tayang's stomach while I was wrestling with the gutting. The Dolphin Fish is definitely a carnivore, and this little fellow was swallowed whole. From the 'scientific' point of view, I was intrigued that the small fish's fins and tail had been almost completely digested already, but not its eyes or its skin.

But the final result was seriously delicious; better by a long way than it should be.

Just think of kippers and cod steaks, with mixed flavours.
Posted by Richard Parker at 13:47