Brilliant PR by our Local Government 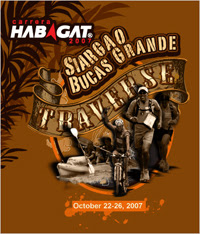 Did you know that the Carrera Habagat, the Philippines' "toughest adventure race, a four-day non-stop multi-event race, which includes disciplines such as kayaking, rappelling and special section tasks which incorporates mind and indigenous games into the race" finished with a final stage and an awards ceremony in General Luna last Friday, 26 October?

No? Nor did anyone else in the town, due to the total lack of public-relations awareness or ability of our newly-elected local government, although they did, on Friday morning, put up a promotional banner across the main road.

I won't rant any more; I'm sure you can see the irony of having a town whose only 'industries' are fishing and tourism run by such a bunch of incompetents.

Could you imagine any French town on the route ever ignoring the Tour de France completely?
Posted by Richard Parker at 10:48