The 'Land of Israel' Myth

In Egypt's Eighteenth Dynasty about 1300BC, Habiru nomadic tribesmen were taken to Egypt as forced labor on building projects. During the reign of Ramesses II (1304-1237BC), Moses led twelve tribes--each believed to be descended from a great-grandson of Abraham--back to the Levant.

This became a revered tradition--the Exodus--among the Israelites, Moses's chosen people. While wandering they forged a collective faith and identity, and received Mosaic Law on Mount Sinai.

They then invaded the peaceful land of milk and honey, Canaan, with great slaughter. 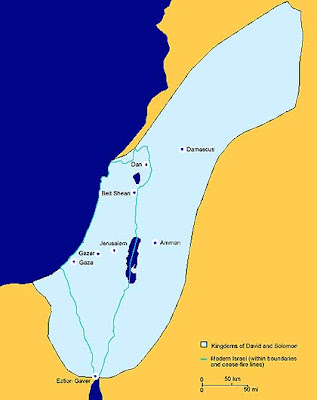 Another map from the Israeli Ministry of Foreign Affairs, shows the supposed extent, some few hundred years later, of the Kingdoms of David and Solomon.

Their description: "King David ruled Israel from 990 BCE to 968 BCE; and his son Solomon ruled after him until 928 BCE. David enlarged his kingdom and brought it to the peak of political and military power. Solomon "ruled over all the kingdoms west of the Euphrates River from Tiphsah to Gaza; he was at peace with all his neighbors" (I Kings, 4:24)."

Note that the Israeli Ministry of Foreign Affairs considers that 'Modern Israel' fills the entire area of British-Mandated Palestine. 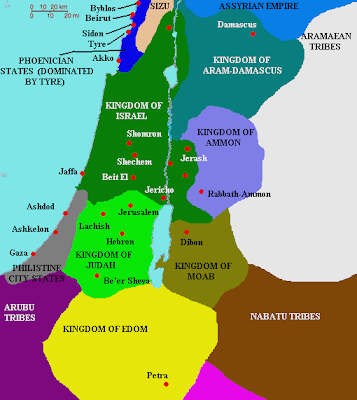 This rather more realistic map of the southern Levant, c.830 BC, shows the multitude of small states that actually ruled the area.
The Philistine and Phoenician city-states, the kingdoms of Aram-Damascus, Ammon, Moab and Edom all existed during the time of David and Solomon, and for a long time after, but an Israeli propaganda map always has to show the wishful thinking of an aggressive state that then, as now, invaded all its neighbours.

Israel went into paganism first and God allowed them to be taken captive in two separate waves by the Assyrians.

Judah worshipped God a little longer, but God sent the Babylonians to take them into captivity about 120 years after Israel. Some Jews returned after 70 years to rebuild Jerusalem.

But enough remained in Mesopotamia for Flavius Josephus, the Jewish historian, to say, 700 years later, about 100AD: "The ten tribes are beyond the Euphrates till now, and are an immense multitude, and not to be estimated by numbers."

Around 200 BC some of the returned Jews lived as an autonomous people in the land of Israel, referred to, by most, as Judea, which at that time was controlled by the Seleucid king of Syria. The Jewish people paid taxes to Syria and accepted its legal authority, and by and large were free to follow their own faith, maintain their own jobs, and engage in trade. 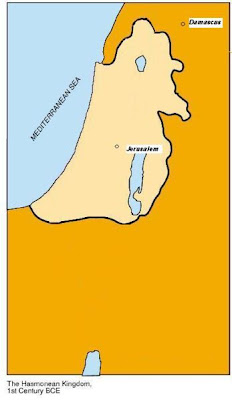 By 175 BC Antiochus IV Epiphanes ascended to the Seleucid throne. At first little changed, but under his reign, the Temple in Jerusalem was looted, Jews were massacred, and Judaism was effectively outlawed. In 167 BC Antiochus ordered an altar to Zeus erected in the Temple.
The king may have been intervening in an internal civil war between the traditionalist Jews in the country and the Hellenized elite Jews in Jerusalem. These competed violently over who would be the High Priest, with traditionalists with Hebrew/Aramaic like Onias overthrown by Hellenizers with Greek names like Jason and Menelaus. As the conflict escalated, Antiochus took the side of the Hellenizers by prohibiting the religious practices the traditionalists had rallied around. This may explain why the king, in a total departure from Seleucid practice in all other places and times, banned the traditional religion of a whole people.

By 166 BC Mattathias had died, and Judah took his place as leader. By 165 BC the Jewish revolt against the Seleucid monarchy was successful. The Temple was 'liberated'.

The festival of Hanukkah was instituted by Judah Maccabee and his brothers to celebrate this event. After recovering Jerusalem and the Temple, Judah ordered it to be cleansed, a new altar to be built in place of the polluted one and new holy vessels to be made. According to the Talmud, oil was needed for the menorah in the Temple, which was supposed to burn throughout the night every night. But there was only enough oil to burn for one day, yet miraculously, it burned for eight days, the time needed to prepare a fresh supply of oil for the menorah. An eight-day festival was declared to commemorate this miracle. Nowadays, Hannukah is about as religious a festival as Christmas, and just about as holy. 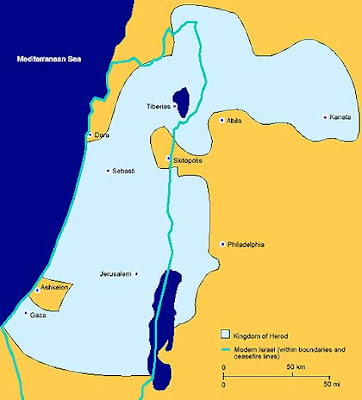 By Jesus Christ's time, the Holy Land had become the Kingdom of Herod (30 BCE to 70 CE).
King Herod, an Edomite, was Rome's puppet king of Israel from 40 BCE to 4 BCE. He conquered the kingdom from the Hasmoneans. When Augustus became Caesar in the year 30 BCE, Herod convinced him of his loyalty, and Augustus rewarded him by adding Jericho, the coastal region south of Dor and the region east of the Sea of Galilee. In 23 BCE, he was given the Bashan, Horen, and Tarchon regions, and three years later, the Golan Heights.

Herod, of course, was the bloke who massacred the innocents and rebuilt the Temple. The foundations of that grandiose scheme are those worshipped by modern Jews at the Wailing Wall.

Then the Romans took over. In 70AD, the Jews revolted against them, and were treated like any other colonised people who ever became revolting.

The remaining Jews tried again. In 132, a revolt led by Bar Kokhba quickly spread across the country, cutting off the Roman garrison in Jerusalem.
Simon Bar Kokhba took the title Nasi Israel (ruler or prince of Israel) - a century earlier a certain JC was crucified with INRI - King of Israel above his head.

The Bar-Kokhba Revolt was of decisive historic importance. The massive destruction and loss of life occasioned by the revolt has led some scholars to date the beginning of the Jewish diaspora from this date. They note that, unlike the aftermath of the First Jewish-Roman War chronicled by Josephus, the majority of the Jewish population of Judea was either killed, exiled, or sold into slavery after the Bar-Kokhba Revolt, and Jewish religious and political authority was suppressed far more brutally. After the revolt the Jewish religious center shifted to the Babylonian Jewish community and its scholars.

Judea would not be a center of Jewish religious, cultural, or political life again until the modern era, though Jews continued to live there and important religious developments still occurred there.

Although: in Galilee, the Jerusalem Talmud was compiled in the 2nd–4th centuries. Eventually, Safed became known as a center of Jewish learning, especially Kabbalah in the 15th century. 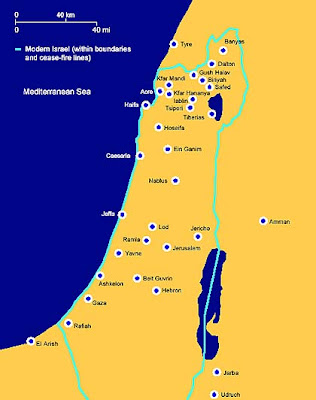 So the Israeli Ministry of Foreign Affairs comes up with yet another map, showing Jewish presence in the intervening centuries before modern times.

Their description says:
"Jewish Communities in the Land of Israel (7th - 11th Centuries)
After the death of Emperor Julian II, in 363 CE, most of the Jewish settlements in the south were destroyed. The Jews remained mainly in the Galilee and in the larger cities.

This is pure propaganda, designed deliberately to make you feel that poor Jews were persecuted in their own ancient homeland.

What a bunch of absolute codswallop.

Thousands of Jews were the intellectual stars of Andalucia, in Spain, fully adopted by the sympathetic Moslems.

They were just about as persecuted as Presbyterians or Mormons in the USA.

Mark Cohen, Norman Stillman, Uri Avnery, M. Klien and Bernard Lewis opine that antisemitism in pre-modern Islam is rare, and did not emerge until modern times. Lewis argues that there is little sign any deep-rooted emotional hostility directed against Jews, or any other group, that can be characterized as antisemitism. There were, however, clearly negative attitudes, which were in part the "normal" feelings of a dominant group towards subject groups (which exists in virtually any society). More specifically, the contempt consisted of Muslim contempt for disbelievers. Wikipedia

Al-Andalus (Arabic: الأندلس al-andalus) was the Arabic name given to those parts of the Iberian Peninsula governed by Muslims, or Moors, at various times in the period between 711 and 1492. It refers to the Umayyad Caliphate province (711-750), Emirate of Córdoba (c. 750-929) and Caliphate of Córdoba (929-1031) and its "taifa" ("successor") kingdoms.
The first period of exceptional prosperity took place under the reign of Abd ar-Rahman III (882-942), the first independent Caliph of Cordoba. The inauguration of the Golden Age is closely identified with the career of his Jewish councillor, Hasdai ibn Shaprut (882-942). Originally a court physician, Shaprut's official duties went on to include the supervision of customs and foreign trade. It was in his capacity as dignitary that he corresponded with the kingdom of the Khazars, who had converted to Judaism in the 8th century.
With Hasdai as its leading patron, Cordoba became the "Mecca of Jewish scholars who could be assured of a hospitable welcome from Jewish courtiers and men of means"
During this period the achievements of Sephardic culture, which were in large measure a synthesis of different Jewish traditions, in turn enriched those other cultures to which it was indebted. Perhaps most notable of Sephardic achievements which occurred during and following Hasdai's time were in the literary and linguistic fields.
Hasdai brought a number of men of letters to Cordoba, including Dunash ben Labrat (innovator of Hebrew metrical poetry), Menahem ben Saruq (compiler of the first Hebrew dictionary, which came into wide use among the Jews of Germany and France), and philologist Dunash ben Labrat. Celebrated poets of this era include Solomon ibn Gabirol, Yehuda Halevi, Samuel Ha-Nagid ibn Nagrela, and Abraham and Moses ibn Ezra.

Jews also formed large respected and influential groups in Baghdad, Cairo, Tripoli, Tunisia, and Morocco, besides Spain, and began to move eastwards through Europe, towards the Rhine, the westward limit of Mittel-European barbarian tribes.

That's as far as Sephardi Jews ever went. They were met, around there, by Ashkenazi 'Jews' but that's a different story altogether.

Richard, take a look at my blog post here:
http://dudescoffeeblender.blogspot.com/2007/10/pos-ini-ancestral-homeland.html
the town of Dedan, Arabia, aka La Ula, did you ever get over to that area? It used to be part of the Edom & Nabatean region, has some nice Petra-like ruins nearby. I'm wondering if there's a nice beach or if it's a desert oasis.

Did you ever get over to Mount Carmel and see the neandertal caves? I've never had any interest in going to Jerusalem, but the Sea of Gallilee would be a nice inland place.

I still think the Palesrael concept is cool, maybe the Bahai ARC complex could be a royal palace, that's on Mount Carmel, google it, pretty spiffy.

But I'd really rather be diving on some tropical beach instead of chilling up here at the rainy redwood coast of Nor Calif. alas
DD

Juniper in the Desert said...

And how many Native tribes of America were killed so you could put your ugly white ass and the ugly white asses of your family on the beautiful redwood coast of northern California?

Or is it ok if you are Jewhater/nazi?

"Juniper in the Desert" you're such an obvious ignorant prick that I don't propose to argue.

Just don't post any comments on my blog again.