Comment: In all truth, I expected a lot more from Nasrallah; undated aerial photos of the St Georges Hotel and harbour are just not enough. There have been Israeli overflights of Beirut since the 1970s, when I lived there. RP 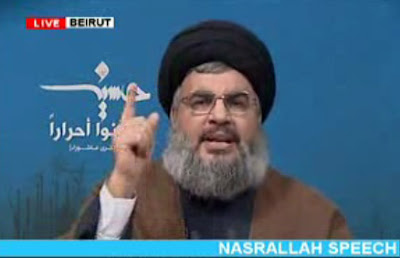 People watch Hizbollah leader Hassan Nasrallah speaking via video link during a press conference, on the assassination of Rafik Hariri in Beirut.
For weeks, the Hizbollah leader Hassan Nasrallah has claimed that Israel was behind the 2005 assassination of the former Lebanese prime minister Rafik Hariri, but the evidence he supplied in a nationally televised news conference this week failed to entirely persuade the Lebanese public and politicians.
Most Lebanese were in agreement, however, that his two-hour, multi-media presentation on Monday evening was certain to spark heated debate.
“I don’t think it changes much,” said Oussama Safa, an analyst with the Lebanese Centre for Policy Studies. “Nothing convincing, too general. Although I do think it probably will generate some discussion.”
In his presentation, Mr Nasrallah sought to allay suspicions that Hizbollah was involved in the killing of Hariri, who was blown up by a massive remote controlled bomb while travelling in his motorcade along Beirut’s corniche. A UN special tribunal in The Hague is prosecuting those responsible for the attack and is expected to hand down indictments in the case within months.
In advance of the highly anticipated news conference, Mr Nasrallah had promised to provide “material evidence” demonstrating that Israel had carried out the killing and on Monday, he aired videos he said were intercepted from Israeli drones and showed that Israeli intelligence agents were tracking the routes regularly taken by Hariri’s motorcade.
“Israel has the capability to carry out these types of operations, such as Hariri’s assassination, and Israel’s history is full of assassination operations against high-ranking figures and leaders,” Mr Nasrallah said.
He also described, with great precision, previous instances in which he said Hizbollah “traitors” had been caught trying to create dissension between the party and Mr Hariri on behalf of Israel.
Gen Michel Aoun, leader of the Hizbollah-aligned Free Patriotic Movement, said Mr Nasrallah’s speech contained more than enough new material to justify further inquiry by the tribunal.
“There is valuable evidence and it is worth taking it into consideration,” Gen Aoun told Hizbollah’s al Manar television yesterday
The loudest voices in Lebanon, however, were those who proclaimed that without more substantive proof, Mr Nasrallah’s speech would do little to alter the political calculus.
“If the international tribunal had evidence on ex-premier Rafik Hariri’s killers, then it could continue its operations without taking into consideration what Sayyed Nasrallah has said,” Phalange Party leader Amin Gemayel told al Jazeera.
Samir Franjieh, a senior leader in the anti-Hizbollah March 14 movement, called the presentation unpersuasive for him, but said it may have been directed at a different audience.
“It doesn’t change how I felt yesterday and the reaction around me was that what [Mr Nasrallah] said was not really credible,” Mr Franjieh said. “What he tried to do was to convince his own people about what happened.”
Some followers of Mr Nasrallah worried that his speech had not done enough to sway doubters.
“I expected more evidence from Sayyed Hassan last night,” said one supporter, Hassan Jaber, 43, a barber in West Beirut.
“The material he showed is surely important, but not enough to silence Hizbollah’s opponents in Lebanon. I was waiting to hear phone call recordings, or pictures of the people who worked on the bomb, or even stronger evidence. But he promised there is more to show, so let’s wait and see”, Mr Jaber said.
Another supporter, a journalist who lives in Beirut’s southern suburbs, agreed, saying that while the faith and loyalty of Mr Nasrallah’s followers was assured, the challenge was persuading others.
“You don’t have to think of the people in this community,” said the man, who agreed to be quoted only on condition of anonymity. “You have to think of the people on the other side.”
One politician close to Hizbollah, who asked not to be named, called the evidence compelling, but acknowledged that in the run-up to Mr Nasrallah’s presentation, Hizbollah may have raised expectations too high.
“In that sense maybe [the evidence] was not enough,” the politician said. “Maybe the expectations were too high. Because they made lots of people expect that it was really conclusive.”
But Ibrahim Mousawi, a spokesman for Hizbollah, rejected this criticism, saying, “Those who are talking about ‘smoking guns,’ they are introducing this idea themselves.”
“It’s not like [Mr Nasrallah] is practicing magic,” Mr Mousawi said. “When he announced that he was going to hold this press conference, he said he was going to bring implications that would be usable to accuse Israel, and they can open horizons for the investigations. He didn’t in the first place promise that he’s going to give irrefutable evidence that Israel did this.”
Posted by Richard Parker at 17:46