Feeding At The Pentagon Trough 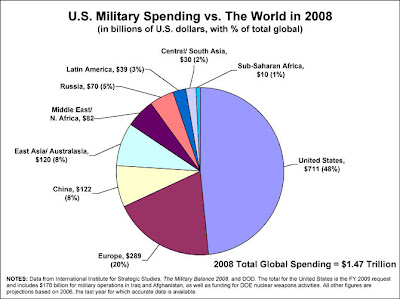 To see what Dr Davidson Is talking about, see this chart:
By Dr. Lawrence Davidson

When Americans think about the state of their economy, what they are doing is reflecting on their personal economic conditions. For most citizens, the economy is their pocketbooks and not the state of the nation’s purse. This is part of what can be called “natural localism,” the fact that almost everyone concentrates their attention first and foremost on their local environment. Americans are particularly prone to such myopia due to the emphasis given to “me first” individualism by their culture. Unfortunately, this orientation has proven increasingly harmful for America’s national economy. The federal politicians are as “me first” as their constituents and so no one seems to be able to manage the nation’s money according to national needs. A good examination of this was put forth by former Labor Secretary Robert Reich on August 11, 2010.


With the ghost of Dwight Eisenhower hovering in the background, Reich noted that the U.S. now appears hopelessly devoted to maintaining the economic activities of the military-industrial complex regardless of need, efficiency, or cost. Why so? Because, he tells us, almost four million Americans are directly employed by either the military or military related companies and corporations. This makes the military-industrial complex, “America’s biggest–and only major–job’s program.” It also makes the entire set up politically inviolable. The distortions that result are labeled “nuts” by Reich. Here are some examples of them:

1. Defense Secretary Robert Gates wants to reduce spending on private contractors by one third. The top Republican on the House Armed Services Committee, “Buck” McKeon, protested that this may well “weaken the nation’s defense.” Of course, it is nonsense to accuse the Defense Secretary of weakening national defense, so what is it that Congressman McKeon is trying to say? As Reich explains, reducing spending on contractors corresponds directly to the lose of jobs in any number of states. Loss of jobs means loss of votes for incumbents, and that weakens McKeon among others.

2. Mr. Gates wants to close the Joint Force Command in Norfolk, Virginia. It is superfluous and thus an unnecessary expense. Virginia’s Democratic Senator Jim Webb, who sits on the Senate Armed Services Committee, declared this “would be a step backward.” Of course, it is nonsense to imply that Robert Gates wants to undermine national security by “stepping backward.” So what is Senator Webb trying to say? As Reich explains, he is saying that the Joint Force Command employs 6,324 people as well as 3300 private subcontractors. If Webb went along with putting all those people out of work he would probably lose his own job as well.

3. What happens when you have a gigantic cargo jet that you no longer need? That is another of Mr. Gates’s dilemmas. The C-17 is passe. Alas, it also keeps 34,000 people working at Boeing and its subcontractors in no less than 40 states. The Senate thinks it is a good idea to order ten new ones at a cost of $250 million apiece.

4. Then there is the F-25 “Strike Fighter jet.” Each one is to come with a duplicate engine it does not need. This costs us all $2.9 billion. The Defense Secretary says this is not logical. Well, that depends on whether you live in Indiana or Ohio. There you will find media advertisements funded by General Electric (the engine maker) sporting GE workers in “Support Our Troops” T-shirts complaining that the government wants to deny these two states of 4,000 engine related jobs. The House of Representatives has recently seen fit to support duplicate engines.

The New York Times has described the situation this way, “There has been a feeding frenzy at the Pentagon budget trough since the 9/11 attacks. Pretty much anything the military chiefs and industry lobbyists pitched, Congress approved–no matter the cost and no matter if the weapons programs were over budget, underperforming or no longer needed in the post-cold-war world.”

In total the U.S. spends close to a trillion dollars a year on “national defense” and “national security” related items. There is so much redundancy, inefficiency, and sheer fluff in all of this that Reich concludes that “national security is a cover for job security.” One could probably cut the entire array of defense related expenditures by one quarter to one third and never lose a beat of one’s security related heart. That would be a quarter to a third of a trillion dollars that might be spent on schools, mass transit, health care, parks, sewers and water systems, alternative energy, job training and retraining, low cost housing, the arts, fixing potholes, ad infinitum. In other words, funding all the things that help make up a vibrant civilization. But the advocates for such things, even the paid one’s in Washington, seem not to be able to compete. In March 2005, 750 scientists at the National Institutes of Health lamented that money for basic research into infectious diseases was going instead into “bio-terror research.” Things have not improved since then. But how many of us really care? Not the vast majority of those employed by the military-industrial complex. Locked into their “me first” localism, they can proclaim that they have theirs, and the rest of us can go to…..the unemployment lines.

What all this means, in the simplest of terms, is that in the United States there is no such thing as national interest. The nation appears to be nothing beyond the total of its pork barrel sub parts. And the most powerful of these are military related. If the U.S. is something more than these parts, Congress should have identified that “thing” by now and honored it. There is no evidence that this has happened. Of course, national interest does exist in rhetorical terms. We hear it all the time. The phrase is always trotted out when you want to justify some demand in a way that leaves opponents open to the charge of being unpatriotic.

In addition, this all means that the largest spending operations in the federal government are carried on in a fashion that no competent household manager would tolerate for a minute. The General Accounting Office, which knows what is going on and often tries to expose the corruption of it all, is utterly incapable of changing the general way business is carried out. So the next time you hear a politician complain about the deficit, ask him or her about the bloated defense budget and watch them beat a hasty retreat. The next time you hear a legislator, federal, state or local, throw up their hands and say that there is just no money for public education, etc., ask them about those venal defense contractors. Chances are they will stutter and shuffle and smile like a ninny, or perhaps join you in your outrage.

But actually, the number of Americans who pay attention to all this, who think about the bigger picture, are in the minority. Most of us are ignorant of the complexities of national politics and content as long as our own taxes do not go up. Even the unemployed are docile, unorganized and feeling helpless. Someday, the way we do business might cause our economic house of cards to fall in a way that sparks a truly massive political backlash. Perhaps we have seen intimations of that future in the multiple financial crises of the past decade. However, that time has not come. And, the New York Times notwithstanding, the hemorrhage of monies through the open arteries of the Senate and House Armed Services committees has yet to reach mass consciousness.

Civilization ought to mean something more than how many duplicate engines come with an F-25. Yet, what happens when we can no longer tell the difference between the pap of special interest propaganda and the quality of our lives? “Perhaps civilization is approaching one of those long winters that overtake it from time to time.” That was a suggestion made by the philosopher George Santayana in 1922. A prescient observation for our own day, despite the looming threat of global warming.