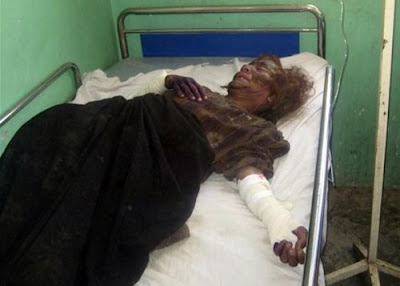 July 25, 2010 by politicaltheatrics
On any given day NATO hospitals in southern Afghanistan enter “CONDITION BLACK” – a status that alerts military tactical commanders that hospital beds are full and patients should be diverted elsewhere. Commanders’ options are limited however – in the south NATO has only two Role-3 hospitals – those that are capable of dealing with complex polytrauma that is a common result of IED blasts.
It’s typical for a soldier to arrive from the battlefield with injuries requiring vascular, orthopedic, burn, and general surgery. The most seriously wounded will stop at the British hospital in Helmand province or the US hospital in Kandahar province for stabilization surgery prior to the long flight to Europe for further care. These hospitals are modern-day “trauma factories” dealing with scores of brutally battered patients daily, not all of whom are soldiers. Many of the wounded are innocent Afghan civilians whose neighborhoods have become battlefields. In fact, Afghanistan Rights Monitor (ARM) (an independent and impartial Afghan rights group) reports that 1,074 civilians were killed and over 1,500 were injured in the first six months of 2010.
And that’s where this gets complicated. Even though the NATO hospitals will report CONDITION BLACK, they will always make room for NATO troops requiring care; there just is not another option. Not so for the civilian casualties; in CONDITION BLACK NATO will either refuse to collect them from the battlefield, or deliver them to the poorly-staffed Afghan Army hospital near Kandahar – the only Afghan Army hospital in the entire southern region – and not capable of complex polytrauma surgery. The result is that NATO is triaging patients based on nationality vice on medical need.

Although the Geneva Conventions require the warring parties to protect civilians and provide medical care to the wounded, the US chose to escalate the war knowing that civilians would increasingly be killed and wounded – without a proper level of trauma care in place. While ARM attributes 60 percent of civilian casualties to the Taliban, they are not a signatory to the Geneva Conventions and have no medical facilities. Such is the condition of conducting a counterinsurgency – the burden lies with the nation states – US/UK.

The General: In July 2009 General McChrystal issued a directive that required commanders to more carefully consider civilian casualties while engaging the enemy. A 29 June 2010 article by Amnesty Internationalii credits this policy with a 28 percent reduction in civilian deaths in the second half of 2009 from the same period in 2008. Ironically, also on 29 June, The New York Timesiii quoted General Petraeus as having a “moral imperative” to protect his troops. General Petraeus has since directed a review of the rules of engagement that will likely result in lessening restraint and increasing civilian deaths. As the principle author of the US counterinsurgency doctrine, General Petraeus must realize what this failure to protect the population will cost in terms of civilian support of foreign troops.

The Senator: A small group of veterans – part of Veterans For Peace – in Traverse City Michigan – appealed to the Chairman of the Senate Armed Services Committee to investigate the lack of medical care to civilians. Senator Levin has yet to respond.

Meanwhile, in this poor isolated nation with few true allies, it continues that the most innocent bear the brunt of the suffering; six civilians are killed and eight wounded daily. It’s time to end the war. Short of that the Commander-In-Chief must do the morally right thing – provide medical care to civilians at the same level offered to NATO forces.
Posted by Richard Parker at 09:30