Sensible & Perceptive Views on the Hell that is Gaza

I don’t know when it will stop - or if it will stop.
What I fear is an international event of such magnitude that attention will be focused elsewhere allowing Israeli brutality much freer reign than it already has.

In that case, God help the people living there.
Realize, however, that under the present circumstances - and in line with Zionist/Israeli history since 1947-48- Israel has no intention of allowing a viable, territorially contiguous Palestinian state.
Had this ever been a real goal, it could have been brought about 60 years ago.

On the forthcoming Annapolis 'Peace Conference':

Q: As we now know, the United States has been pressuring Palestinian President Abbas to include Mohammed Dahlan in the regime. What is your opinion on this?

I don’t know what it will take for people on this side of the Mediterranean/Atlantic to understand that Israel is systematically destroying an entire people and its quest for national self-determination.

It’s happening before our eyes each day - and in the most unspeakable ways - but barely gets any notice at all.

Until there is a political shift here in the US my own mood will remain one of profound cynicism. 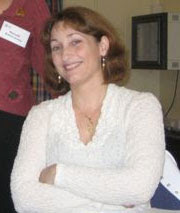 But Jennifer's very name - Loewenstein- gives the game away.

She is, very obviously, a:

I became interested in the Palestinian/Israeli issue in the early 80's. I joined the Arab-American Anti-Defamation League and attended a conference in Washington. At a question and answer session with a Russian gov. official a Jewish peace activist who was writing for the Washington Report on Middle East Affairs at the time asked only one question which was "Why wasn't Russia letting more Refuniks immigrate to Israel?" This story sums up my attitude toward enlightened Jewish peacemakers.

You´ve left me hanging. I can imagine the story, but details would help to fill out my knowledge of this whole episode.

Why don't you write a story about that conference, and your experience and feelings?

I will publish it here(perhaps edited a bit, but not to take away the essence).

My weblog is based on small personal stories of my own experience; I hope that others can contribute their stories, on the same basis.

Wonderful blog you have here, Richard. I happened to catch your comment on DesertPeace and followed the link.

I'm flattered that you would like me to write about my experience but honestly it's been over twenty years ago and I can't even remember the woman's name. The long and short of it is that the vast majority of Jewish peace activists are interested in a peace that is tailored to Israeli interest only when they are interested in peace at all. This is a bit cynical but I think the lack of progress supports this view.