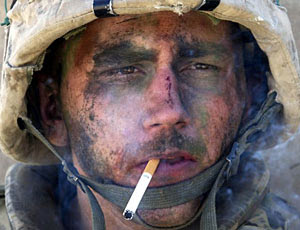 Read the ongoing story about Marine Lance Corporal James Blake Miller, a country boy from Kentucky, in Am I to blame for his private war?

Maybe it will make you think a little bit more about the real victims of the Great War on Terror on both sides.

Excerpts:
"'Blake Miller is a flipped-out, 22-year-old former Marine who was involved in a major battle,' Armstrong said. 'He's been through a lot, seen a lot. I can't endorse the quick fix. It's a common pattern that vets are in and out of therapy for years.'

"They drove me to the secluded mountain top outside Pikeville to show me the spot where Miller had asked Jessica to be his girl, just days before he shipped out to Iraq. They laughed, embarrassed by the story. Miller sipped root beer and Jessica Nehi orange soda."

"It was 9 November 2006, two years after I took the famous picture of Miller and a year after he left the Marines. In his empty apartment, Miller took his wedding picture from the wall and replaced it with a Meritorious Mast, a certificate detailing his valour in combat. He drank beer for comrades living and lost. He spoke the names of the dead: Brown, Gavriel, Holmes, Ziolkowski.

"Miller lives in a refurbished trailer behind his father's house. Two TVs provide constant background chatter. The refrigerator is bare. A hound called Mudbone spends most days tied in the yard."

Definitions of cannon fodder on the Web: