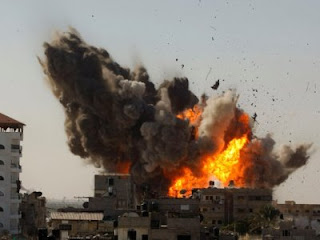 Today is my birthday, and also the first anniversary of the beginning of the Hanukkah Massacre that started a year ago, with the deliberate targetting of a civil police graduation ceremony, where more than 40 aspiring civil policemen were killed, outright.

You have probably heard of many of the horrors perpetrated in that campaign by the Israelis, but maybe you haven't heard of the efforts they made to keep it all quiet:

"On Tuesday [30 Dec 08] , the Free Gaza Movement reported that its vessel, the Dignity, which it was using to transport medical supplies by sea to the besieged territory, was rammed and turned back by Israeli naval ships. The Dignity sustained heavy damage, the group reported, although no one was hurt. "When attacked, the Dignity was clearly in international waters, 90 miles off the coast of Gaza," a press release stated, describing Israel's actions as "wilful and criminal."

Israel's Foreign Ministry spokesman Yigal Palmor said, "The fact that the ship was carrying journalists, including a CNN crew that has already broadcasted live three times, proves that this was a provocation on the part of the media."

The administration's nervousness at the presence of journalists is conditioned by the scale of the devastation it has already wreaked, and the even worse atrocities it is preparing
Posted by Richard Parker at 18:26